Patract applied the treasury proposal #49 for Europa v0.3 , and now we have finished the development at Europa and Europa-UI. From now on, Europa has been in production level and most of the planned features are delivered.

In v0.3, Europa’s main goal is to improve the ease of use for developers to use Europa. This version provides a relatively complete front-end interface for analyzing and displaying the details of Europa’s execution of the contract, strengthening the collaboration with other Patract tools, and Provides pre-packaged executable programs for windows, macOS, and Ubuntu platforms. Developers no longer need to build a complex node environment for developing and debugging contracts, but directly download the execution program of the corresponding platform to use.

The work of Europa v0.3 will be divided into two parts: Europa on the node side and Europa-UI on the UI side. In the following text, Europa is used to represent Europa's node, and Europa-UI represents the product UI work in v0.3.

In 0.3, all completed functions are as follows:

Currently, the binary files of the corresponding platform can be downloaded directly from the github repository Europa-UI. The binary file can be run after clicking it (Linux needs to be given execution permission). The systems supported by the three-terminal platform are as follows:

Among them, macOS does not support M1, but you can try to use Rosetta to run the binary package of macOS, but we do not guarantee all compatibility. For Ubuntu, we only guarantee the normal operation of Ubuntu 20.04 and above. Ubuntu 18.04 and below versions cannot run due to the compatibility of glibc.

The Europa node has functions such as data path selection and workspace. Therefore, Europa-UI makes these functions easier to use: 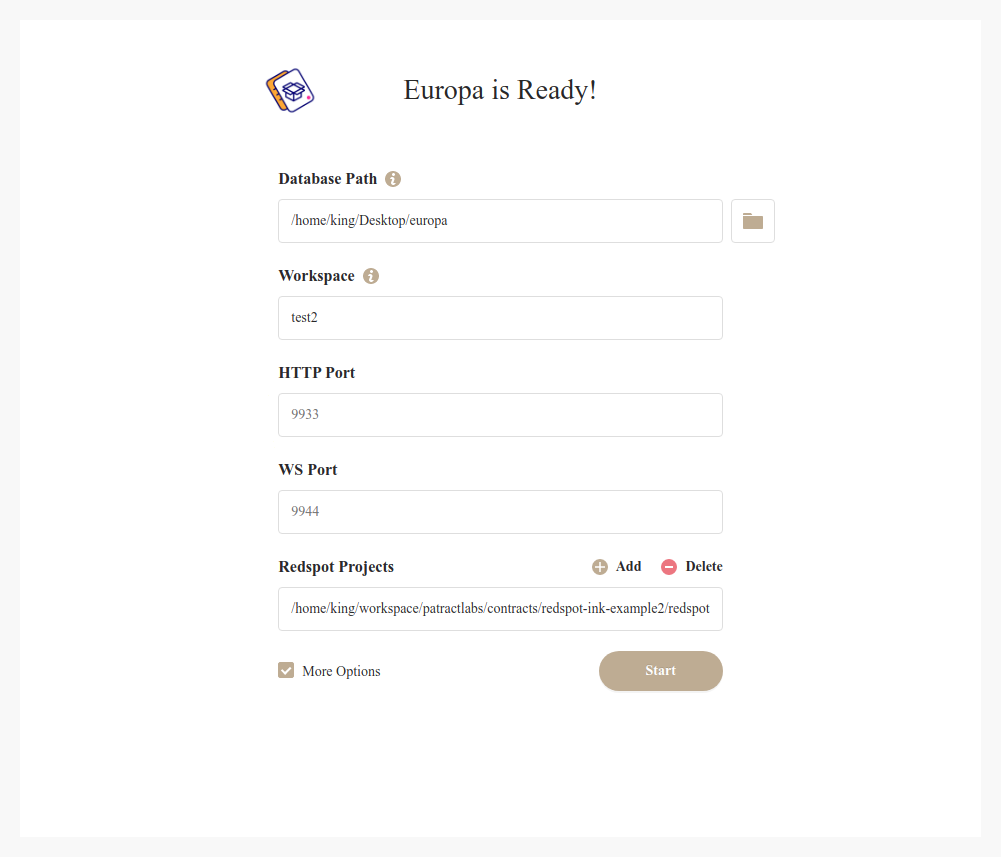 This is the entry interface of Europa. We can see that Europa is similar to Ganache in the Ethereum ecosystem. Users can choose their own data path and workspace. At the same time, you can also set the Websocket and RPC ports when the Europa node is started.

On the other hand, it is worth noting that you can choose to register the Redspot Project path in the startup configuration item, so that starting Europa will be associated with the compiled contract under the Redspot project.

The main functions of Europa-UI are similar to Polkadot/Substrate Portal (collectively referred to as apps). As shown in the figure, the tabs listed are related to blockchain elements. Among them, Contracts is the part that Europa focuses on strengthening for programmers. Explorer is similar to the explorer in apps and is used to display the basic information of the current blockchain. Compared with the basic functions of apps, there are greater enhancements in Blocks, Extrinsic and Event. On the whole, compared to apps, which are designed mainly for users in terms of design ideas, Europa-UI's design focuses on how to more comprehensively display the chain and contract information that developers care about.

In addition to the basic information of a block displayed by Explorer, Europa-UI provides some operation interfaces for calling Europa's special functions:

After Europa has packaged the transaction to generate a block (for example, use "go to block" to advance a few blocks), click the transaction name or Events under the block, you can directly display the bar to the transaction or event details page, and see More detailed information.

The function of the Account page is similar to that of Account in apps, you can add or export accounts, and directly call the account for transfer.

In the contract code interface, it is mainly divided into Deployed Codes and Redspot Codes.

Click code hash to enter the detailed interface of the contract code. Among them, all the contract instances indexed by Europa and associated with this contract code will be listed under the "Instances" column.

Click the contract address to enter the detailed information interface of the contract. Among them, Funtions has the same functions as apps, and can directly send call transactions or rpc calls to the contract. 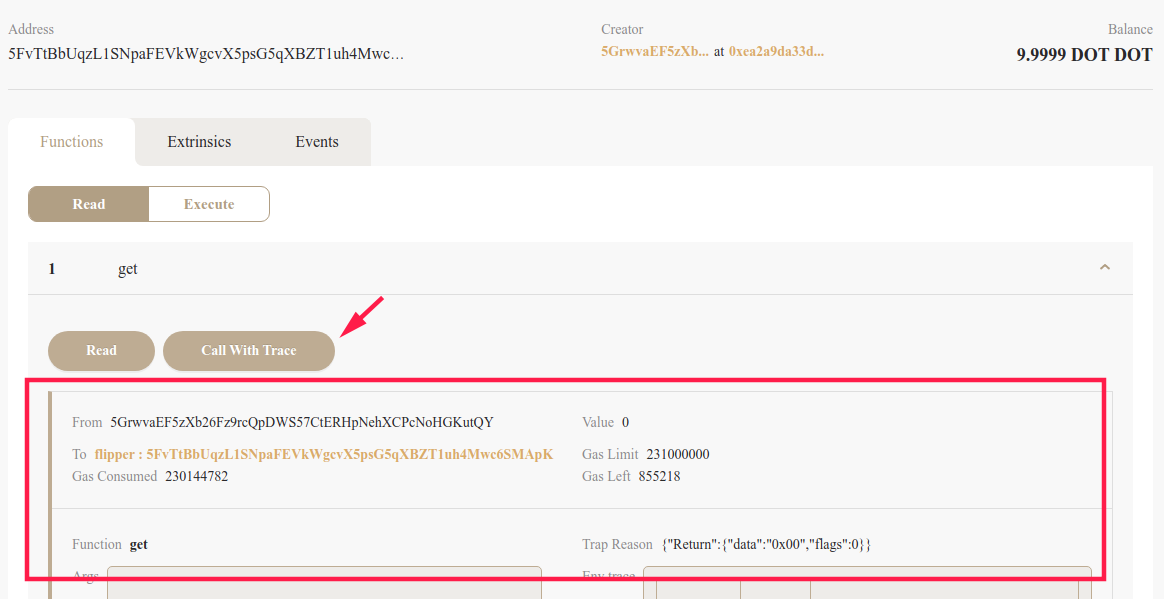 However, in addition to the calls consistent with apps, Europa-UI can also call the special rpc provided by Europa through the "Call With Trace" method, and feed back the contract trace called by this contract. 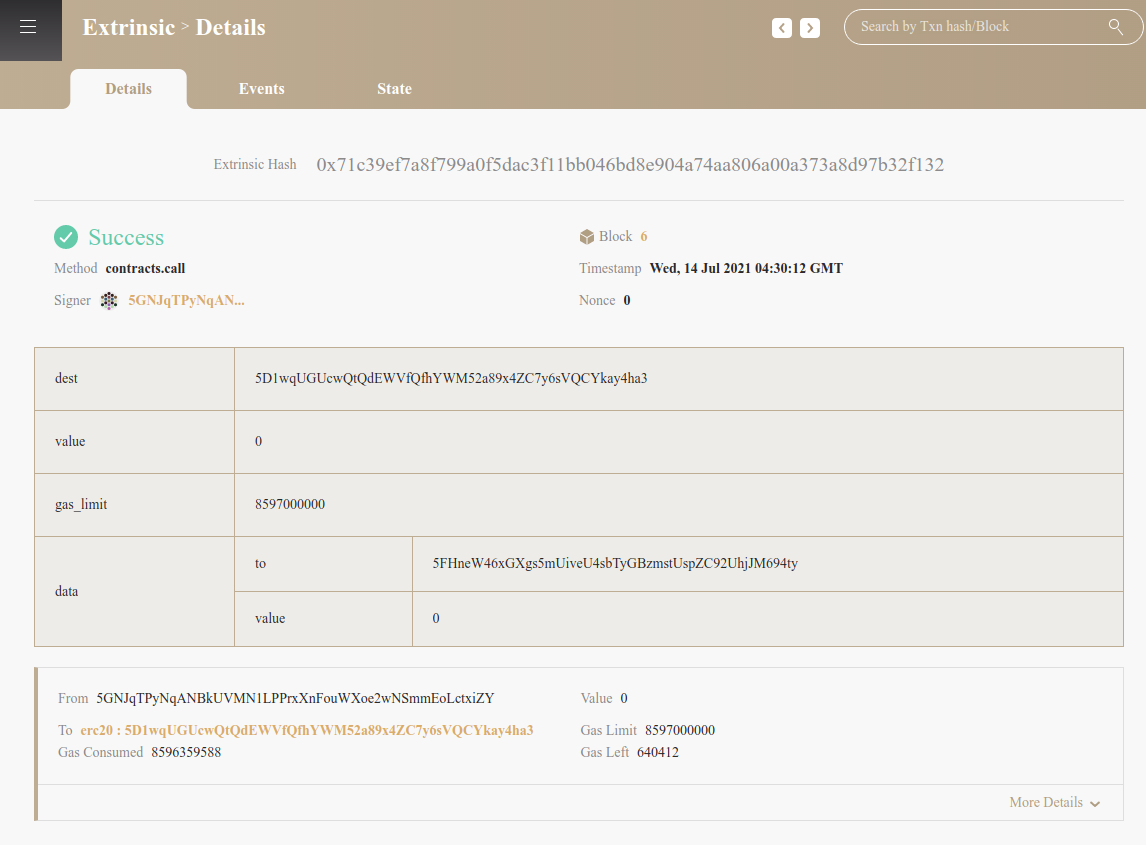 After entering a contract detail interface, you can see that Europa-UI has specialized in contract-related transactions. As shown in the figure, for the contract call transaction, Europa-UI displays all the parameters of this call, especially the data field. Europa-UI parses the data part according to the contract metadata information, showing that the parameters of this contract call are: "to", "value" and their specific values.

Below the parameter table is the contract trace information called by this contract.

The detailed information shows the parameter information of this call, the "Trap Reason" of the returned information, and the most important env trace information for debugging. If there is an abnormality in this transaction call, the Wasm backtrace message of Wasm Error will also appear below.

The contract trace information will be displayed as an "indented" relationship between contracts, and the relationship between contract calls can be observed from the from and to of the indented contract. For example, as shown in the figure above, in this call to contract "5EQLt", contract "5EQLt" calls the "5D1cq" contract and the "5FdGb" contract separately through cross-contract calls. It can be seen that this transaction is the method of calling the all contract. The erc20 and miner_erc20 methods are called in the all contract.

Click on their "More Details" information interface respectively, you can get a lot of details through detailed information.

Click State under Extrinsic to enter the state interface of the current transaction change. This function is similar to Etherscan's StateChange, such as this link. In the v0.2 version of Europa, it is possible to record the state changes in a block, but it is impossible to record the transactions that a single Extrinsic changes during the execution.

Therefore, in the v0.3 version, we refer to the implementation of state_traceBlock, introduce the use of tracing to record the state changes of transaction execution, and can change This change is provided for external use in the form of rpc. Europa-UI combines this function and expresses it in Extrinsic-State.

The state changes are divided into 6 categories:

Therefore, on the State page, the current transaction state changes are listed in the form of a table. Among them, if you only care about the storage changes made by contract execution, you only need to track PutChild, KillChild, and ClearChildPrefix.

The function of Developer is similar to that of apps, but the "Log" page is provided under Developer, which outputs the original log of Europa running to the console in Europa-UI.

Since Europa v0.3 supports the direct printing of seal_debug_message, the log information during contract operation (for example, calling ink_env::debug_println! in ink! for log printing) will be printed to the console. And Europa-UI took over the startup of Europa, so when you need to consult Europa's log at this time, you can check it on the current Log page.

The functions shown in Europa v0.3 above can be verified in the following ways: