Redspot v0.1 includes the basic functions of compiling contracts, testing contracts, and deploying contracts. When developing v0.2, we took a closer look at Ethereum's contract development tools, such as Truffle, Waffle, Ethers.js, Hardhat (aka Buidler when we applied v0.2), etc. We believe that the architecture of Hardhat (https://hardhat.org/) is the most suitable for the Polkadot contract ecosystem. Hardhat has a very high degree of flexibility, scalability and a complete set of plugin ecology. These plugins can add additional functions and integrate into your workflow. Redspot v0.2 refactored Redspot v0.1 based on Hardhat's code, and finally Redspot v0.2 has the same plugin system as Hardhat. This allows us to easily support contract development on different parachains through plugins in the future.

Like v0.1, you can install the template we provided through npx redspot-new ERC20. You can also easily integrate Redspot into your existing contract project by following the demo video we provided earlier.

Considering that some developers are not familiar with the configuration of TypeScript, we provide a template based on TypeScript by default. We also turn off TypeScript's runtime type checking by default, so that developers can easily use TypeScript's code hinting function, and they don't need to be troubled by TypeScript's type errors. If you want to use JavaScript for development, you only need to set allowjs in the tsconfig file.

After the installation is complete, you will get a directory structure similar to this:

In the template, we provide a test file, a deploy script, and an ERC20 contract. Unlike v0.1, we moved cargo.toml and lib.rs to the contracts directory and the structure became clearer. In v0.2, we provide configuration options for artifacts, contracts, and tests in redspot.config.js, you can change it to your favorite name.

On the basis of v0.1, we have added toolchain configuration items. You can set the value of rust.toolchain in the redspot.config.js file. The default is nightly. We have also integrated this step of compiling the contract into the test and run commands. When you run npx redspot test or npx redspot run, the contract will be compiled in advance. You can also cancel this behavior by passing the --no-compile parameter.

When we developed v0.1, because the ERC20 contract was not yet available, our test code was relatively simple, and we could only test reading values and sending transactions. Now we can write more complete test cases. Below is the unit test code for the ERC20 contract:

In this test case, we used @redspot/patract to perform basic tests on events that read data, transactions, and contracts. In v0.1, we use the jest test framework. During the development process, we found that the scalability of jest is not good, and the print log is very confusing. So in v0.2 we switched to mocha and chai. They are more scalable and the logs are more friendly. But we do not force developers to use mocha. If you still want to continue using jest, you can also install the dependency of jest, yarn add jest ts-jest @types/jest, and then use the command npx jest starts the test. In v0.1, you cannot choose the test framework you want, but it is different in v0.2. We hope to provide a framework that allows users to freely combine various functions.

In v0.1, we found it difficult to repeat unit tests. Because Substate does not support the deployment of multiple identical contracts for the same account. So in v0.2, we call a setup function before running each test. It will initialize the contract and provide a random account, and then we will use this random account to redeploy the contract. In this way, the influence of the external environment can be avoided and unit testing can be carried out more stably. Now you can run npx redspot test to test, and you will get a result like this: 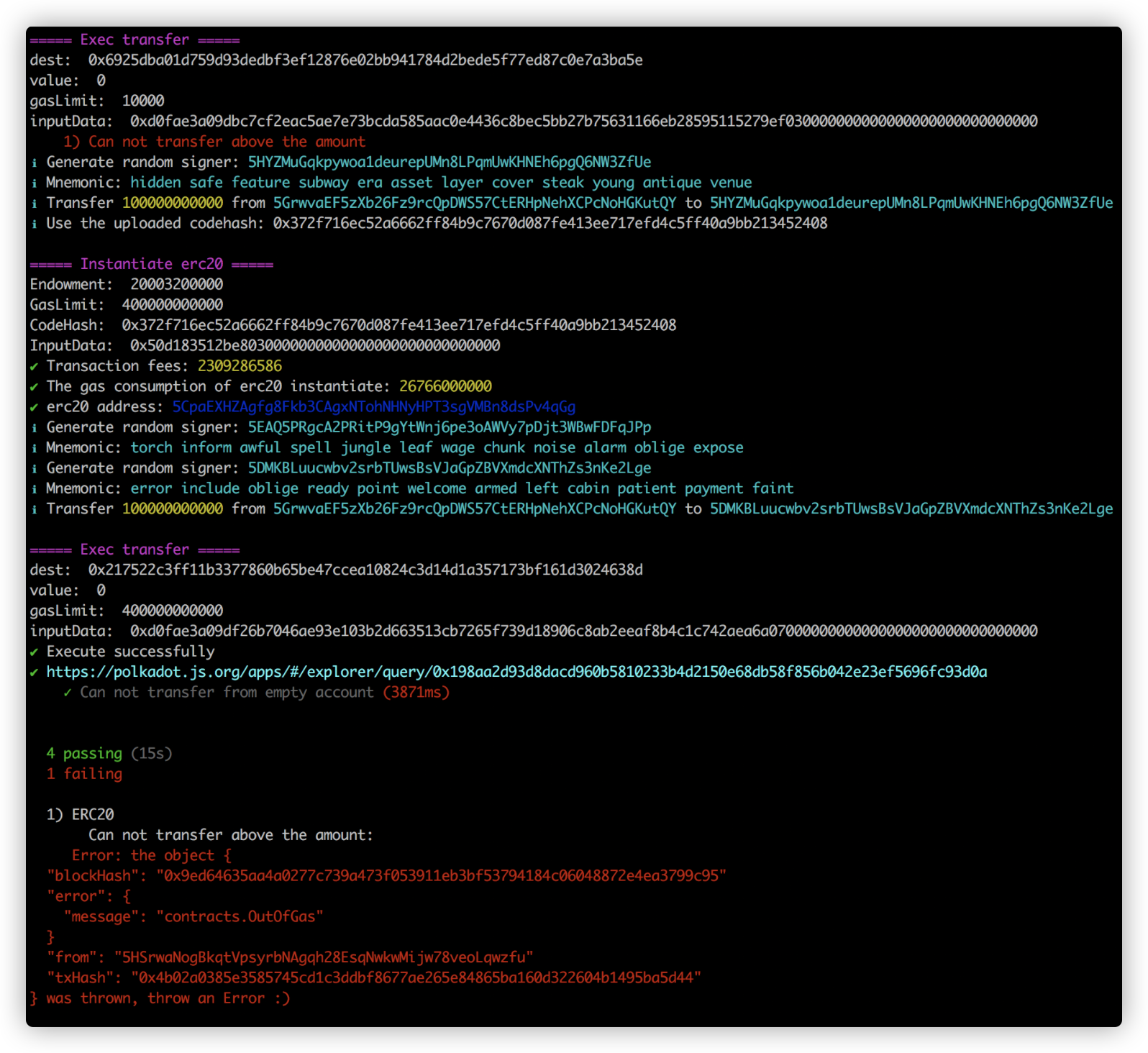 As you can see, we provide a very detailed log of contract calls. Including contract call parameters, consumed handling fees, consumed GAS, etc. If the user wants to know the details of the transaction, he can also view it on the browser by clicking the successful transaction link. Of course, the log level can be configured through loglevel.

In v0.2, we added the function of JavaScript Interactive Console. It supports injecting the runtime environment of redspot in the repl of nodejs. Similar to Truffle's develop command. Console is a supplement to unit testing. Through the Console, we can easily perform temporary tests on the contract. Users can directly call the contract in the Console and get the result. You can open the console through the npx redspot console command. 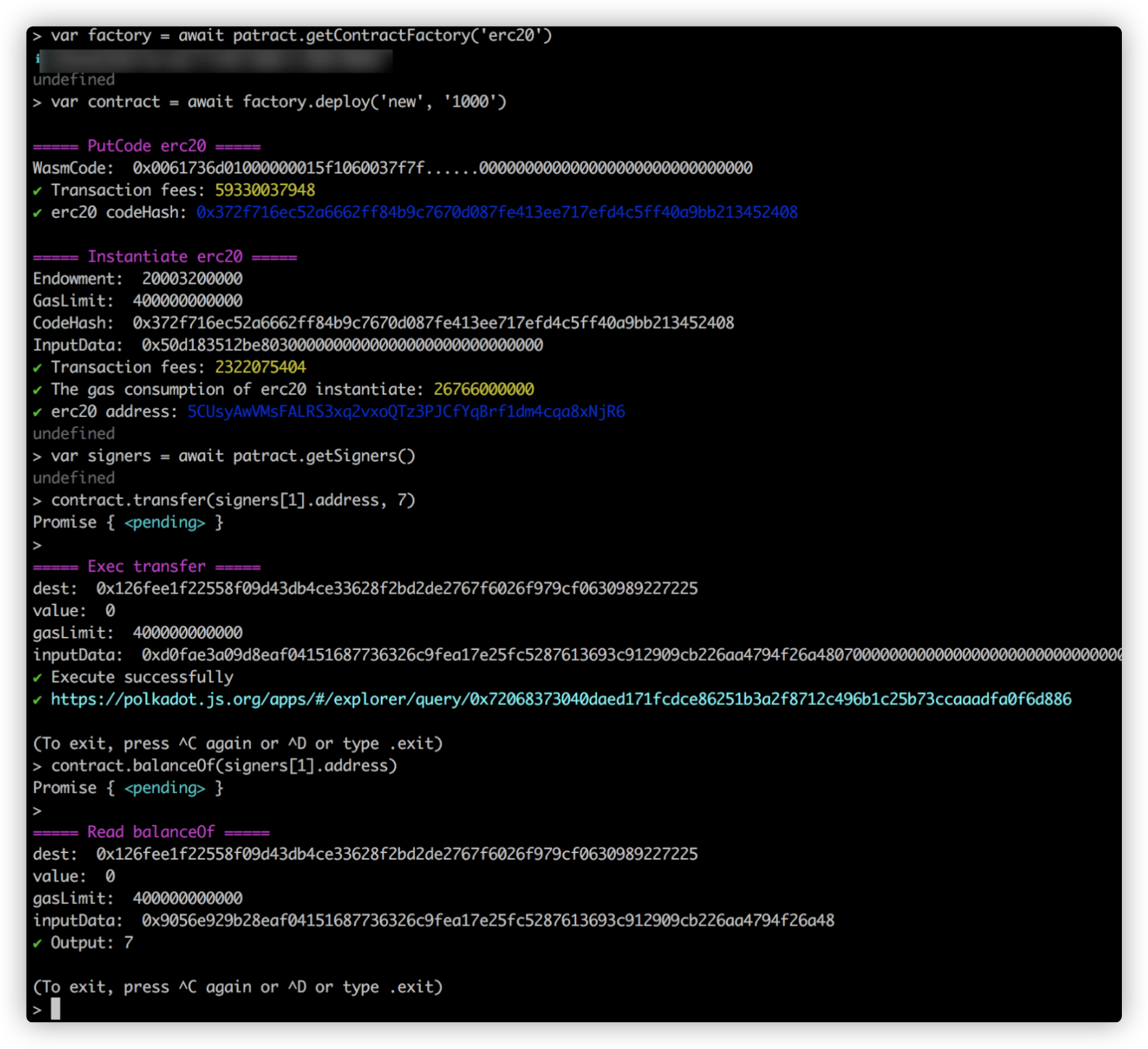 In the above code, we use the @redspot/patract plugin to deploy our contract. You can use the npx run [filename] command to run this code, or use node [filename] to call this code. Unlike Truffle, we did not do excessive encapsulation. All functions can be called through the Redspot runtime environment. However, introducing it is very simple, you only need to do const env = require('redspot').

This is the code from the configuration file for Redspot v0.2:

In this file, you can import the plug-ins you need to use. On the basis of v0.1, we also added gasLimit, mocha and other configuration items. In the v0.1 version, accounts can only be imported via private keys, while in v0.2, we support accounts in Substrate URI and keypair format. Users can import the json file of their private key in the form of keypair. This can make the private key more secure and avoid leakage.

The role of the Contract object is to call the contract, which is similar to api-contract. However, we redesigned the interface based on actual needs and referred to the contract module of Ethers.js. Compared with api-contract, there are several differences:

In @redspot/patract, we encapsulate the cumbersome template code, so you only need to do this to call the contract transaction:

You can also set gaslimit, value and signer

Plugins are the core part of Redspot, and they are also the focus of our next work. Most of our future functions will be integrated in the form of plug-ins. We hope that Redspot can become a progressive, scalable contract development framework, rather than being bloated like Truffle. Currently, plugins can be integrated into Redspot by extending the runtime environment, adding Tasks, and extending Tasks.

The @redspot/patract plugin was introduced in this way. Let me demonstrate how to add a new plug-in.

We can add the previous setup function to the redspot runtime environment to simplify the contract deployment process in the console. code show as below:

The ʻextendEnvironmentfunction can help us inherit and extend env. In the callback function of extendEnvironment, we can access the existing env, and we hang thesetup` function under env. Now try the console again: 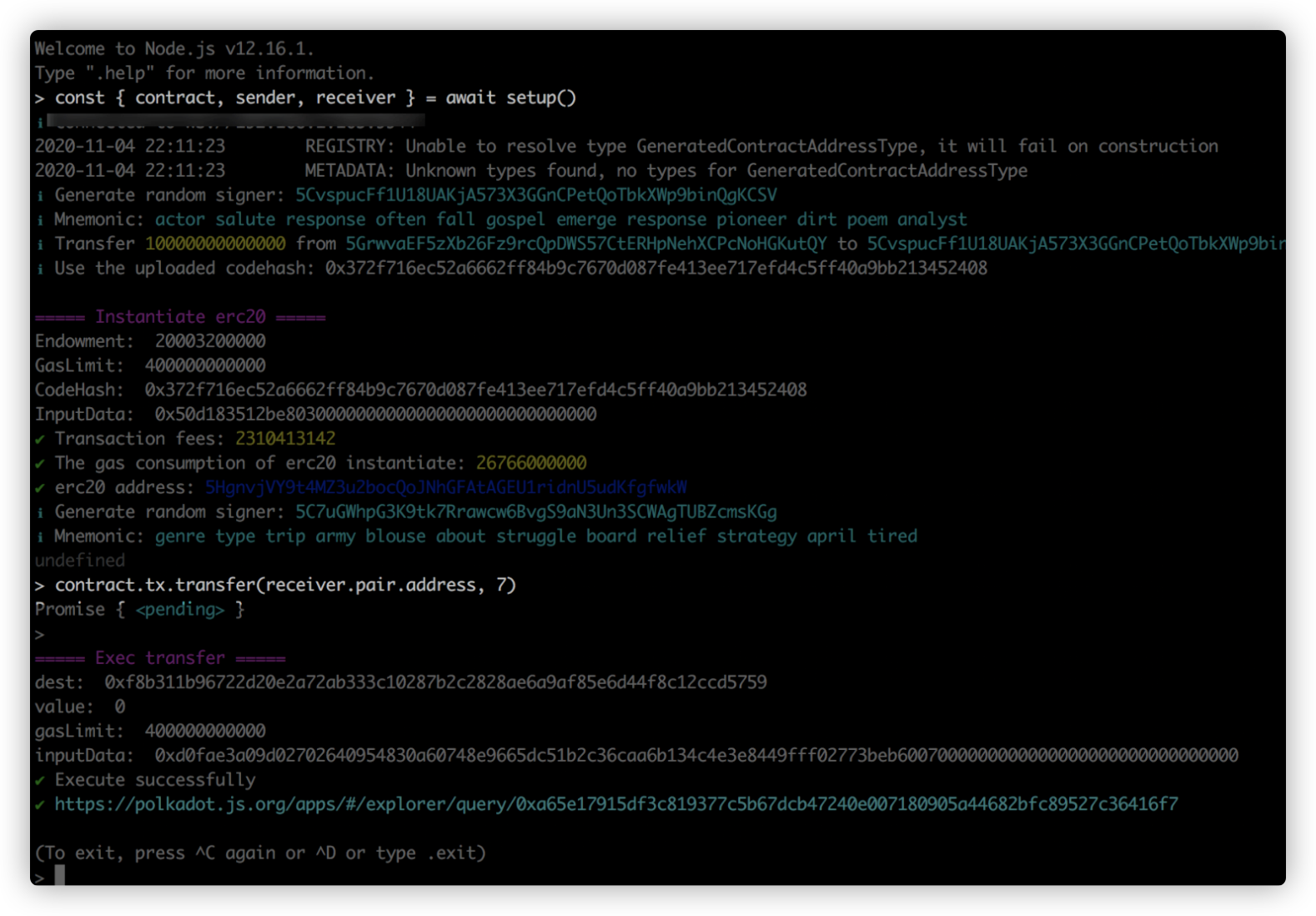 We successfully injected the setup function into the Redspot runtime environment. In the console, setup is a global variable. Now only two lines of code can complete the contract initialization and transfer test.

Task is a JavaScript asynchronous function with some related metadata. Redspot uses this metadata to automatically perform some operations for you, such as parameter parsing, verification and help information.

Everything you do in redspot can be defined as a Task. The test, compile, run commands provided by Redspot are essentially Tasks. And the api they use is exactly the same as the api provided to the user. So the user can write the function plug-ins he wants without restrictions, even compile Solidity, and call EVM contracts.

Next I will create a task that prints the balance.

Then we can run it and get the result:

Redspot has many built-in Tasks and Subtasks. For example, to compile a contract, there will be these Tasks:

We can achieve the desired function by overriding these Tasks. For example, the compile task can be overridden to compile the solidity contract.

You can also extend a task. We provide the runSuper function in the task, which allows you to run the original task. for example: