The core functions of Redspot have been completed in v0.3. In Redspot v0.4, we mainly made some optimizations on the user experience, such as adding docker support, adding a GUI interface, supporting browser extension signatures, and other optimizations. Now let us show the design and implementation of v0.4, as well as how to run and verify it. Like v0.3, you can install a template project locally via npx redspot-new erc20. For specific usage methods, please refer to previous reports or our documents.

For solang contracts, Redspot can find all contracts by matching .sol files.

The compilation configuration of Redspot's default template contract is as follows:

You can also specify a single directory, this can compile a single contract:

Solang is also a similar configuration:

Ink! and solang can exist at the same time. Redspot uses cargo-contract for ink! contract and solang compiler to compile solang contract. We will also provide support for other compilers in the future.

All compilation products can be found under artifacts (or a directory configured by the user):

redspot will generate a .contract file and a .json file for the same contract. .contract contains all the information of .json, and additionally contains the source code of wasm. So .json is only provided to the front-end and used when the front-end does not need to upload wasm.

Note that the names of multiple contracts in the project should not be the same. redspot will detect this situation and report an error. An example of contract compilation can be found.

Clone the Redspot repository and enter the redspot/examples/multi-contract directory. Then install dependencies:

Then you need to make sure you have installed cargo-contract and solang. redspot will not install them automatically.

Then run the compilation command:

redspot known types is a plugin that automatically adds types of known chains.

In polkadot, adding types is very troublesome, because they must be added manually instead of automatically generated. And sometimes it is necessary to deal with the compatibility issues of different chain versions.

We hope that users of Redspot can focus on contract development and not care about these details. So we added this plugin, the purpose is to solve the problem of types of different chains.

We have added this plugin to the template by default, and users do not need to perform additional configuration. If you need to add this plugin manually, first install the dependencies:

Then in the redspot.config file, import the plugin:

We can verify through the Jupiter (you can use the online testnet of wss://ws.jupiter-poa.patract.cn/ ) chain. We change the node of the configuration file to connect to Jupiter, and then take care to delete all types:

Then run commands to query the authorities information. Because jupiter's unique type AuthorityState is needed here, and we have not defined the AuthorityState type, so there will be a parsing error:

Then follow the same steps as before. At this time, because @redspot/known-types will identify the connected chain and inject known type definitions, including the AuthorityState type, it can now be successfully parsed:

In Redspot v0.4, we added support for using docker to compile contracts. This will ensure that the wasm compiled under different platforms is consistent.

Redspot will use redspot/contract this docker image to compile and run the testnet. It is modified on the basis of contract docker image provided by Parity Tech.

Currently only supports ink! contract docker compilation, the configuration is as follows:

Before running the compile command, please make sure that docker is installed on this machine. Run command

⚠️Attention When using docker to compile, it may be affected by the network environment (such as the need for a vpn proxy in China Mainland), which will cause the compilation time to be long. If you use ctrl+c to exit the current compilation command in the middle, the docker container will not automatically stop deleting.

Now it will compile with docker by default. If you want to change the default behavior, please add the --docker false parameter:

Note that if you encounter permission errors, please change the docker.sudo in the redspot.config file to true. This will use sudo to run docker.

Similarly, you can also use docker to run a testnet. The canvas testnet is currently built in. In the future, we will build more testnets for users to choose from.

The current command to run the testnet is:

In fact, its role is just to run the command:

If you want to modify the default running command, you can add the command parameter:

We will recommend and guide users to give priority to using docker, because this can focus on the writing of contracts and avoid a lot of trouble in environment configuration and node startup.

We found that most users use @polkadot/apps or Canvas UI to assist in debugging when developing contracts. So we developed redspot explorer based on @polkadot/apps, with the purpose of replacing @polkadot/apps in contract development. For this we have done a lot of modifications and optimizations. And the native code and web page are connected in a certain program. We mainly made these optimizations:

To use redspot explorer, you need to install the @redspot/explorer plugin:

Then add below in redspot.config：

Note that when running redspot explorer, a service will be started locally, please do not terminate the process. And, please restart the service manually every time when redspot.config is changed. 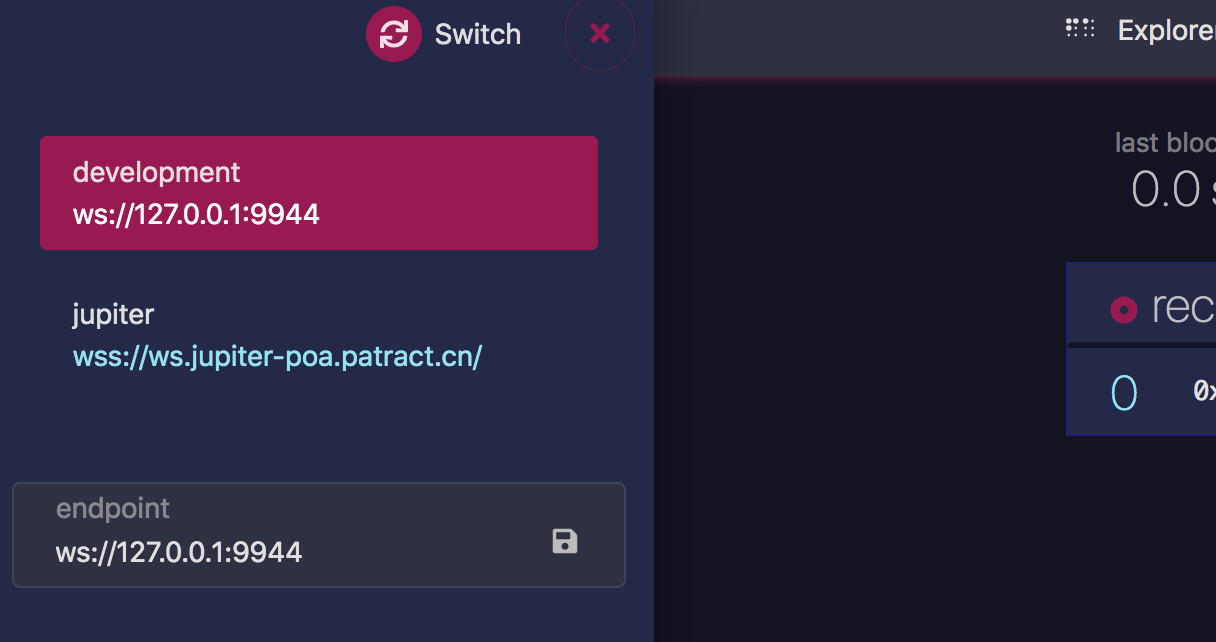 As you can see, you can select the network configured in redspot.

Check the accounts page, the account configured in redspot.config will appear. 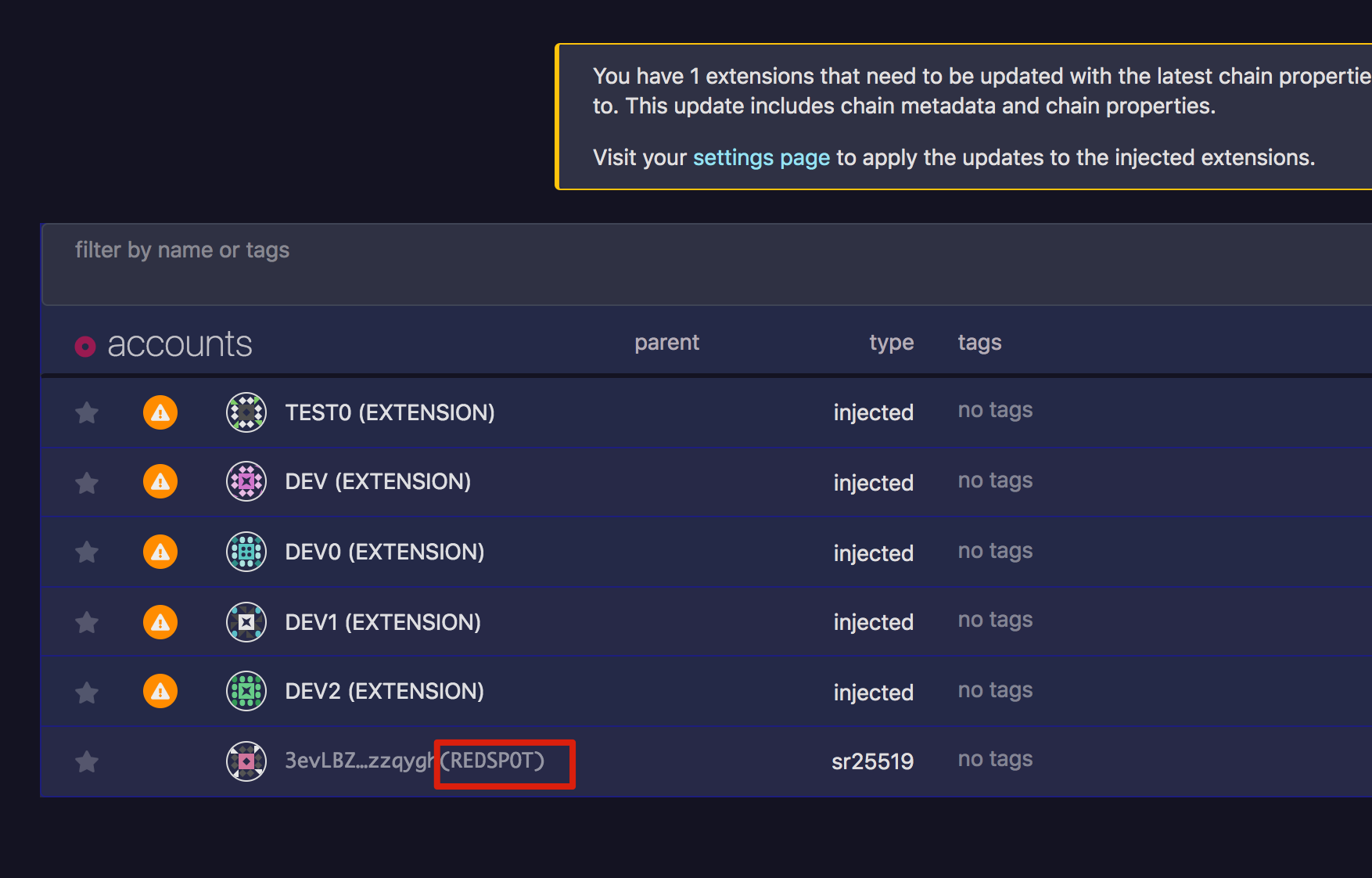 Then change the deploy.ts script: 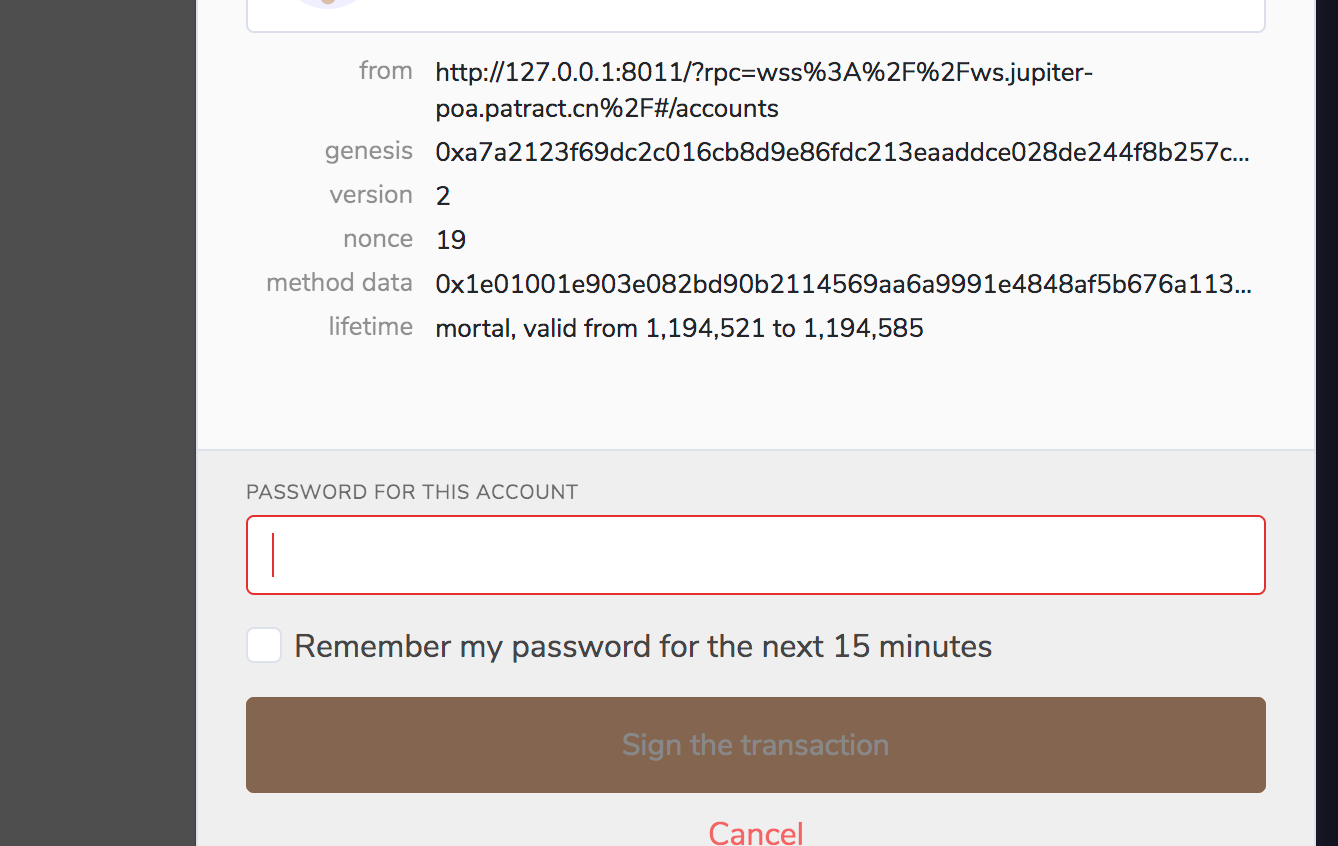 Then deploy the contract. Then after the deployment is successful, check the explorer page:

There will be events on the chain. We look at the contracts.instantiateWithCode event, 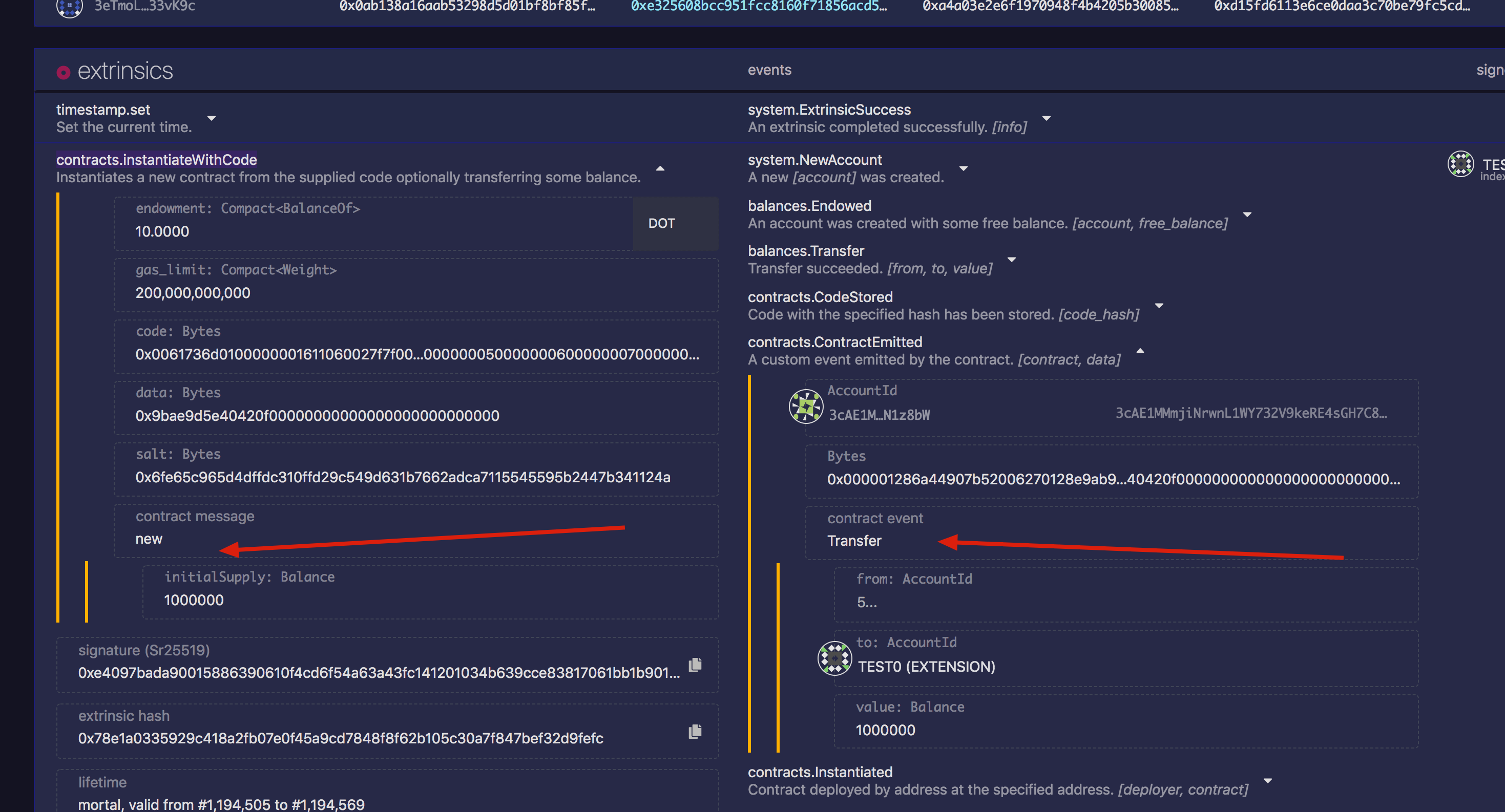 There will be an analysis of contract message and contract event.

Check the codes page of contracts:

The code of the locally compiled contract will automatically appear here.

Then check the contracts page of contracts:

Then we switch to the console page, where we can run the script and compile the contract: 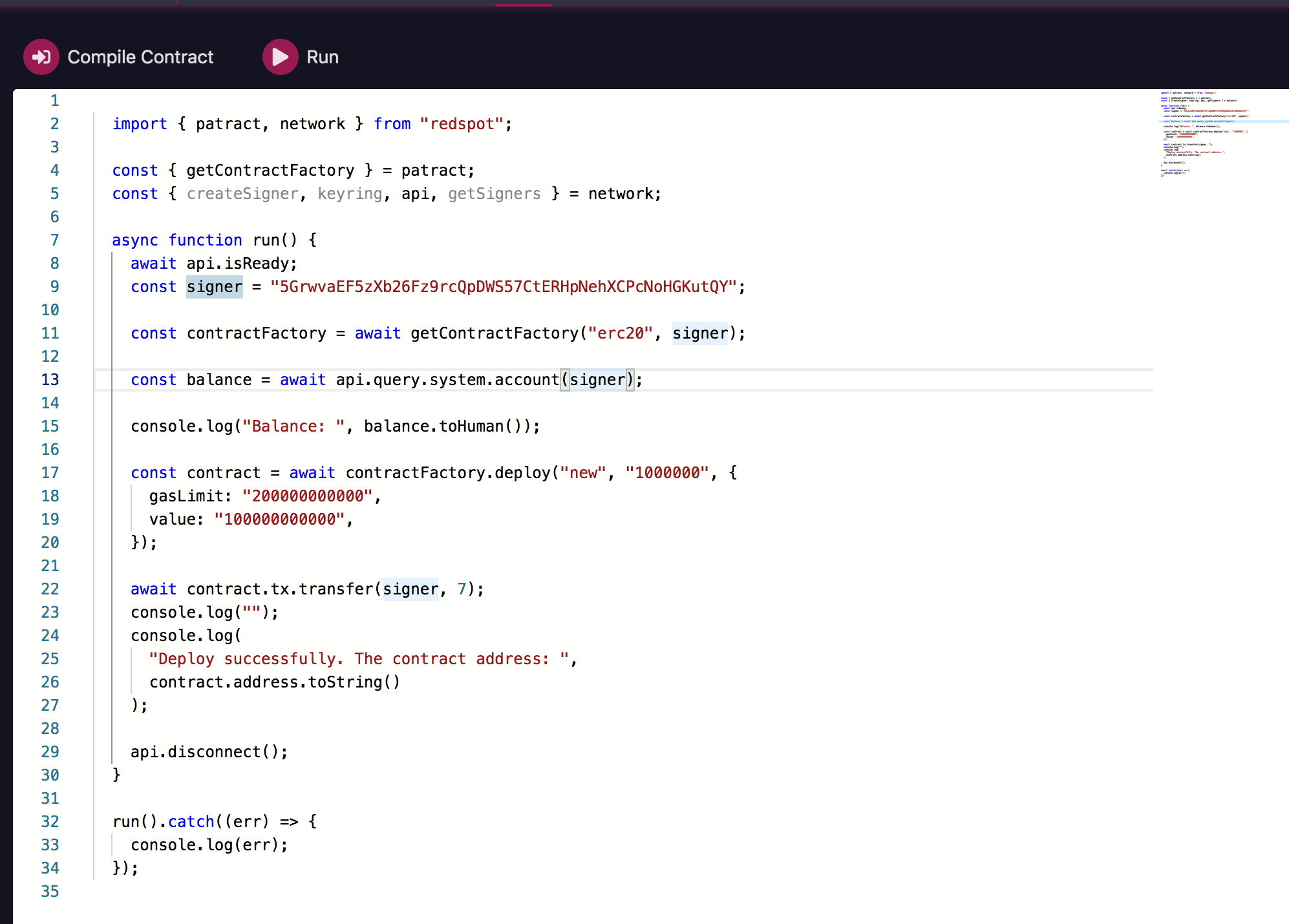 We click compile contract and this prompt appears to indicate that the compilation was successful:

If the compilation time is too long, please switch to the terminal running the npx redspot explorer command and check the log prompt.

Then we click run to run the script, and the console on the right will output the run log:

As you can see, the newly deployed contract will appear here.

When we click on the extrinsics button (the blue "extrinsics" in each row in the "recent contracts" in the figure), a dialog box will pop up, showing the relevant transactions of the current contract:

@redspot/decimals is a plug-in that automatically converts the precision of numbers, such as converting 1 DOT to 10000000000.

Currently, the functions implemented by this plug-in are as follows.

Get the tokenDecimal of the chain automatically

And add the following statement to your redspot.config.ts:

Use when deploying the contract:

This is because that @polkadot/api implements its own set of type system. Therefore, we have rewritten Weight and Balance to recognize functions similar to 1 DOT. If the function used is not the type of Weight and Balance, the above method will not take effect.

How to verify v0.4: Github library#